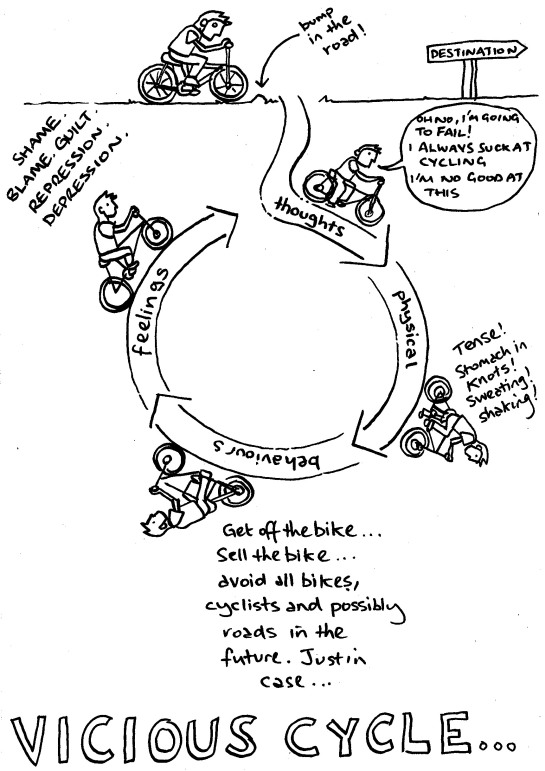 First proper session of CBT this week, and we tackled the cycle of anxiety/depression/whatever. That’s it above, basically. Any of the four sectors can be the activator, and each one can lead to any other and back and forward. For me, the most obvious are ‘Thoughts’ and ‘Physical Effects’, with ‘Behaviours’ being the most obvious outcome, especially avoidance, but I think that might mean that somewhere beneath the surface, ‘Feelings’ is the area I have the most issue with.

My therapist said that my general anxiety levels are so high that even small things were being unnecessarily magnified, and advised that I get on the relaxation trip asap. She gave me a CD with some exercises on it, most of which I’ve done before. But working with a guided CD is so much better than doing it on your own – I did diaphragmatic breathing and progressive muscle relaxation then totally zoned out for the remainder of the exercises, “waking up” to hear the speaker talking about stuff I’d written down, which I’d completely missed.

I got up and Mitch commented on how chilled I seemed – more relaxed than he’d ever seen me. Which was a bit of a wake up call, as there was a point years ago when I was genuinely that relaxed a lot of the time… So obviously I need to work to bring that everyday level of anxiety down, and then work on the other stuff. So expect to see me get totally zen over the next few weeks 🙂

It has totally worked though – last night was a pretty big meeting of the Glasgow league of Writers and I managed to not feel nervous. Also I’ve managed to pull some really good art out of the bag this week, so here’s hoping…

More guest posts on their way too, by the way. Thanks to Neil for his wonderful strip the other day – you must have brought loads of visitors dude – you managed my third busiest day so far!! If you liked his strip, I’d seriously suggest to race over to his Etsy store and buy one of the few remaining copies of ‘Nine Lines of Metro’.

Error: Twitter did not respond. Please wait a few minutes and refresh this page.